Submit a Tip
Tip Follow-Up
Mobile App
If you have any information about these crimes or any person(s) involved, you are urged to call Crime Stoppers or submit a Web Tip.

Cincinnati Police Department Financial Crimes Squad is investigating an Identity Theft which occurred at TruPartner Credit Union at 1717 Western Avenue 45214 in November 2021.   The victim had her state identification card and bank card stolen.  An unidentified subject then tried to deposit forged checks in the victim’s name.

The suspect in the photograph may frequent the Silver Oaks Estate area on Winneste Ave.  With a first name of “Lashanda”.  The victim did not recognize the person in the surveillance picture.

If you have any information on this suspect, please contact Officer James Wigginton at Criminal Investigation Section, Financial Crimes Squad at (513)352-6488. 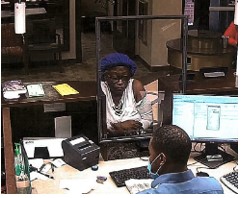 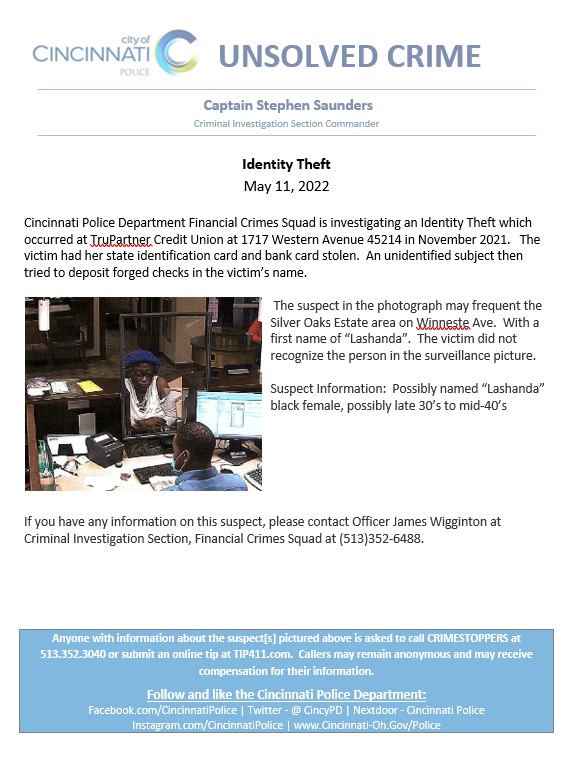 INVESTIGATION OF STOLEN VEHICLE AND HIT/SKIP ACCIDENT
May 06, 2022

The incident occurred on April 29, 2022, at 5:35 PM at listed location.  These two individuals were operating the entered vehicle and caused an auto accident.  The two suspects fled the scene after causing the accident.  Need help in identifying the suspects. 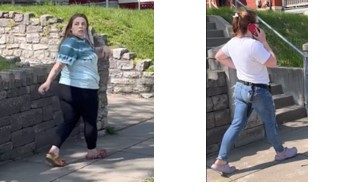 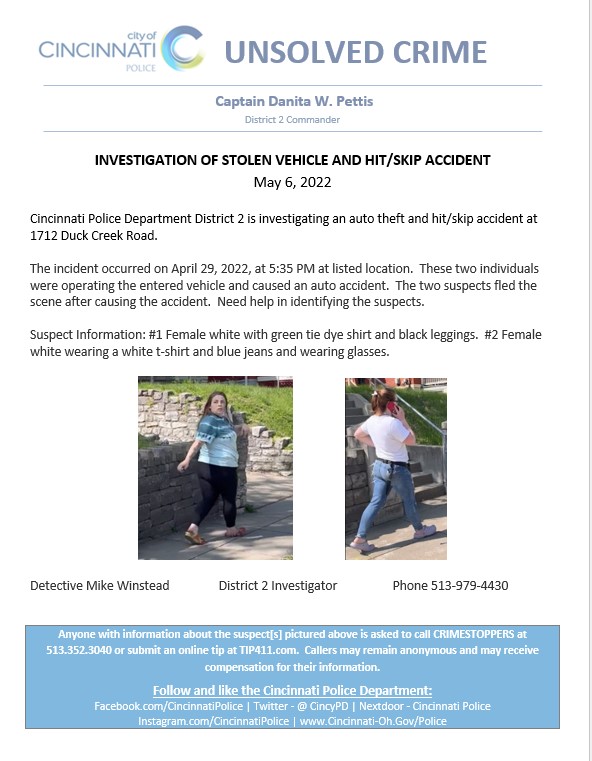 Detectives Need Your Help to Identify These Subjects Wanted for A Theft Investigation:  Cash Reward

On March 17, 2022, around 6:30 pm, a male white suspect and a female white suspect entered LensCrafters in Springdale, and stole 8 pairs of glasses/sunglasses, total value of theft $1702.00. The suspects arrived and left on a motorcycle, unknown license plate, make, model or color. LensCrafters has provided pictures of the two suspects, who both also appear to have visible tattoos. (The photos of the suspects are attached) 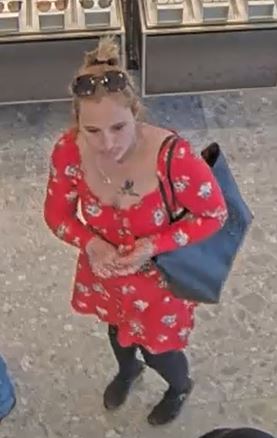 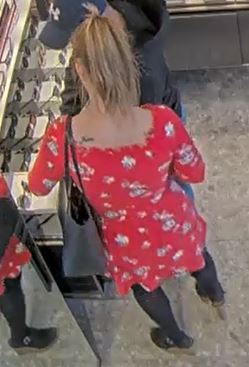 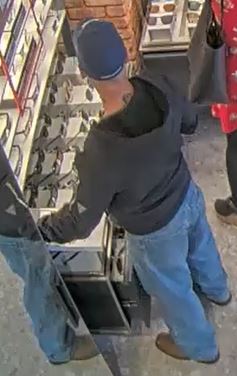 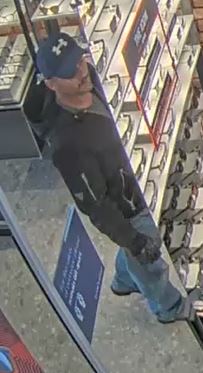 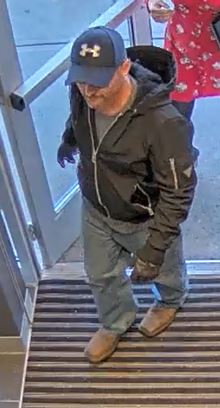 Vehicle appears to be an early 2000’s Chevrolet Avalanche (most likely 2003 – 2006 model year), dark in color with a unique light bar attached to the hood at the base of the windshield.

Anyone who can help identify the vehicle and owner are encouraged to contact Crimerstoppers.

Cash Money If Your Tip Leads to the Identification! 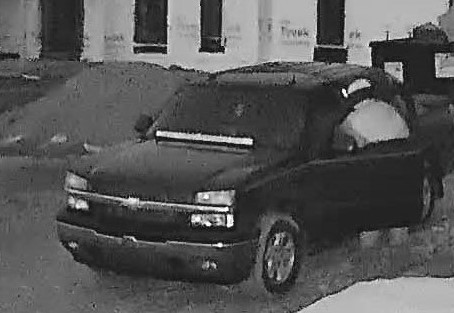 Cincinnati Police Department Central Business Section Investigative Unit need your help to identify this subject wanted for the investigation of a Breaking and Entering that occurred of February 19th, 2022 at 18 West 9th Street. 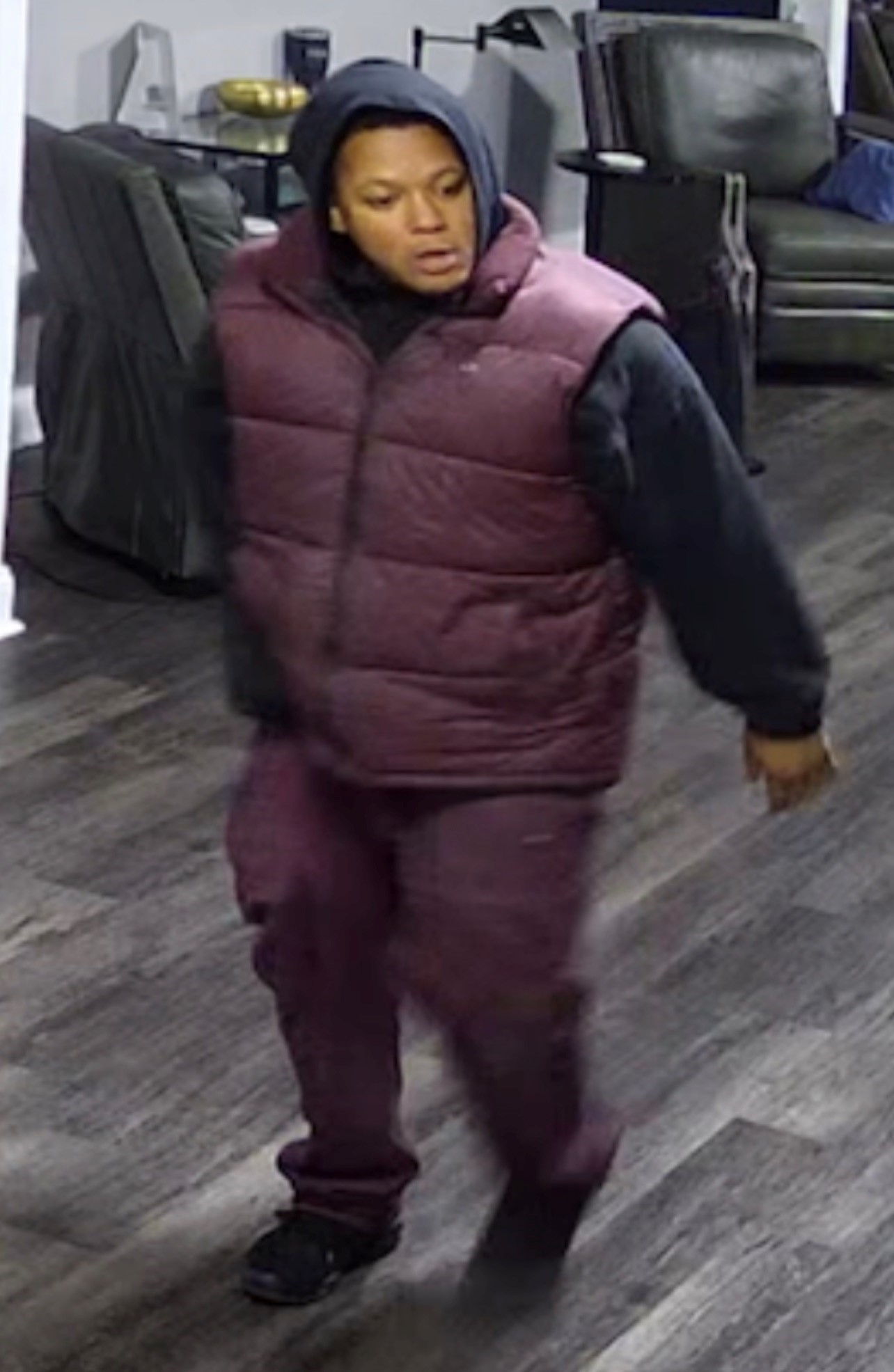 Within the past few months, there have been multiple burglaries in the Cincinnati Tri-state area involving Asian homeowners who own local Asian restaurants. We believe that the suspects are targeting victims based on their ethnicity due to language barriers and cultural differences, and may be primarily targeting Chinese, Vietnamese, and Indian cultures. Most burglaries have occurred in the evening when the victims are still at work. The suspects typically ransack the rooms and have taken currency, jewelry, designer watches, handbags, clothing, and handguns. We believe that there are likely additional victims who have not yet come forward. Burglaries have occurred in Montgomery, Blue Ash, West Chester, Milford, Indian Hill, and Villa Hills (KY). If anyone has any additional offenses or information that could be related, please reach out to your local police department or Detective Lauren Frazier with Montgomery Police Department. 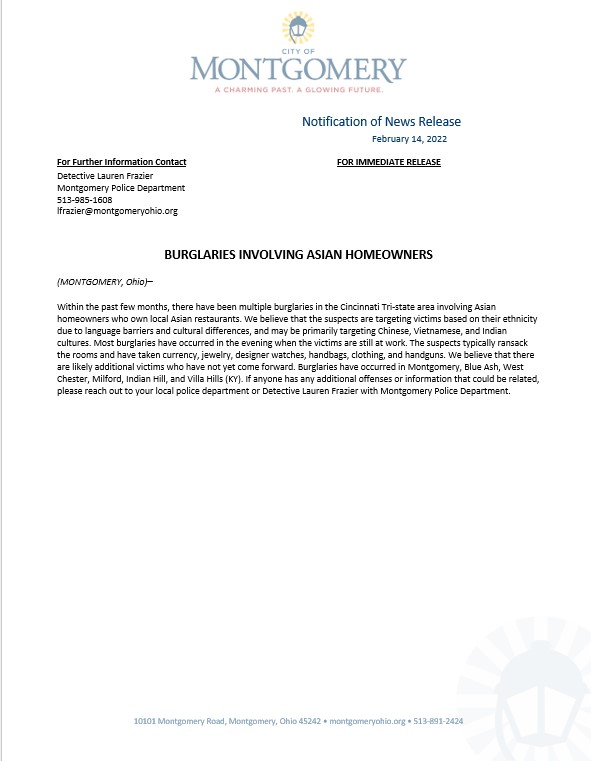 The suspects girlfriend had a fight with the complainant, and both were expelled from the SCPA. The suspect then sent the victim an Instagram message thru his girlfriend’s Instagram stating that he was packing and that he would blast the victim. 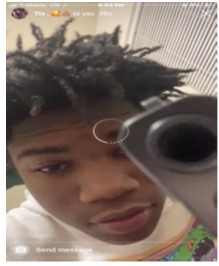 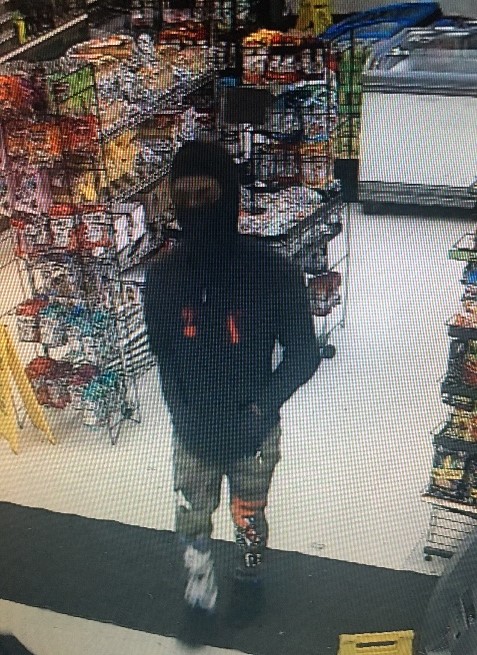 STATUS: WANTED
Earn Cash $$$$$$$$$   Please Help Identify This Subject
On January 1st, at 2258 hrs, the subject in the photo below entered the Speedway which is located at 6203 Wooster Pike and proceeded to put a note on the counter in front of the clerk that read, "this is a robbery and I have a gun" then put the note back in his pocket. Before the robbery, the subject is seen walking from across the street then as he exits, he runs East on Wooster Pike in the opposite direction as he entered.
The subject is described as a white male average build approximately 6'00".
If you can identify this suspect please call Crimestoppers at 513-352-3040 or submit your anonymous tip here. 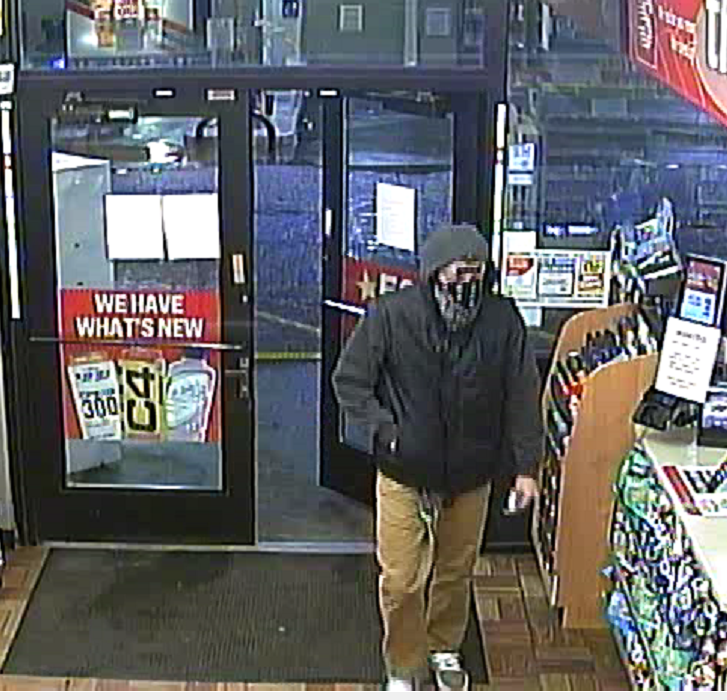 Cincinnati Police Department District Four is investigating an Aggravated Robbery that occurred at an unknown location in the city.

Property Taken: US currency, bank cards and an iPhone 12 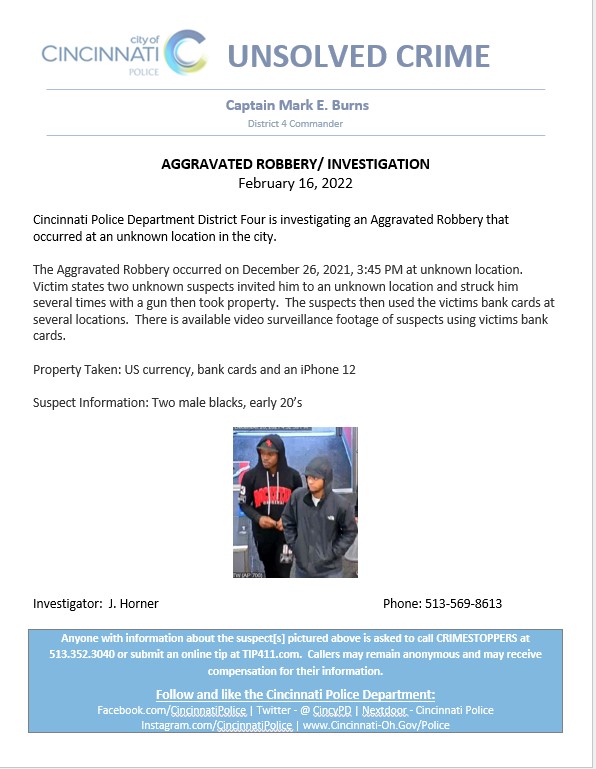